i ate lunch today and i feel guilty about it. i'm not satisfied.

most people in the west eat lunch every day. i've been fasting from it in order to identify with those who don't have this luxury. my stomach churns and my energy is low; some moments are spent thinking only of what i will eat for dinner. but in my hunger, i am filled with a longing. instead of focusing on food i am able to focus on Christ. my lunch hour is no longer dictated by my physical needs, but by my spiritual needs.

i am learning discipline.

it is no easy task to willingly give up food that is readily available. or to resist from trying a new vegan special at a lunch only restaurant. but it is easy to search for God; it is easy to pray. and so, removed from the demands of my body, i am free to do just that every day during my lunch hour. it has been a good week.

i think the turning point came one morning when i actually looked forward to my hour of prayer. i looked forward to giving up comfort for the sake of something greater, NOT for any ulterior selfish motives. i'm not sure i've ever genuinely felt that.

and so, God is changing me. all glory to the Father, and to the Son, and to the Holy Spirit, as it was in the beginning, is now, and will be forever.

the following is a quote i heard while watching the documentary 180 degrees south. it tells the story of a man's journey to patagonia in south america. of course, i am wrecked with chilean nostalgia while watching, considering a great part of the journey takes place in chile. they also show a lot of footage of them surfing, which makes me want to learn to surf even more.

Juan Pablo Orrego, a Chilean environmentalist working to fight for the rights of indigenous people, said the following:

How can people who are trapped in the city try to create a more ecologically minded world if they don't know that it's possible? A good example of how people become closed off from their ecosystems is with their Walkman or iPods. So you start to get further closed off… You don't want to breathe the dirty air, you don't want to hear because it's annoying, you don't want to look because it's ugly. That is why we don't understand nature, love it, or take care of it - because we don't realize that we depend on it psychologically and physically one hundred percent.

if you're an artist, a creative of some sort, you create. you have to, it's like an urgency, a growing itch that never quits. you create because you must. there is a quote by ira glass that i really enjoy: 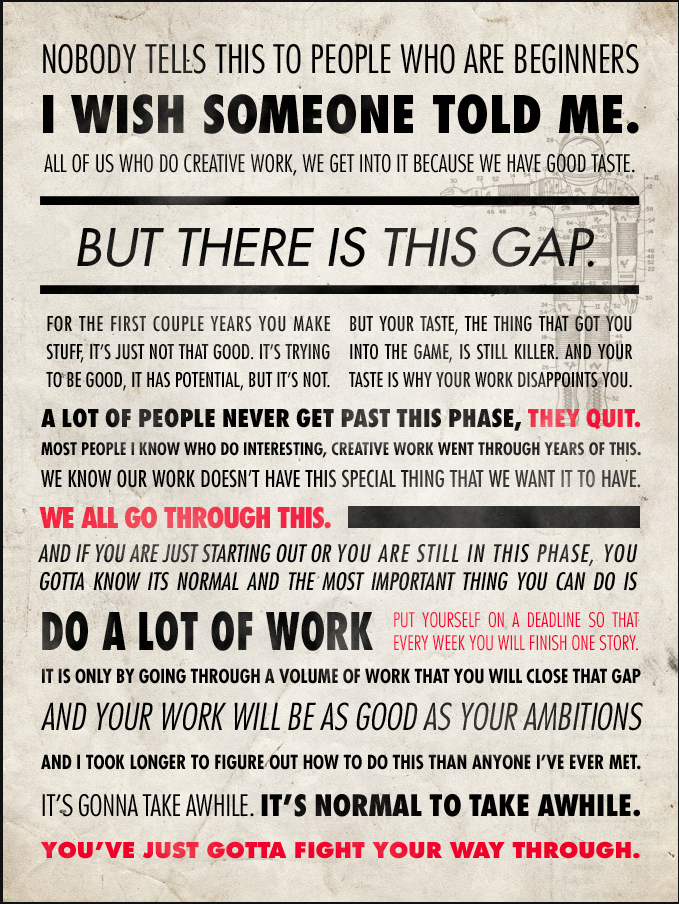 of course we want the outcome of our art to be good - that is what makes it worthwhile. but creating is a process and a journey. maybe God created us because God is an artist, a creative with that same itch. maybe it's the same reason we are redeemed: God is love.

crept up, unsuspecting fledgling of a thought

could it be that everything already exists?

see, because brahms already came up with that one.

let’s take all we want, every note and rest

feast on the reinvention of rhythms

gorge ourselves on measures played backwards

and maybe we’ll find the truth

the truth? all we can do is borrow and steal.

i listen to music on my ipod while i walk to work every day.  today i listened to mos def, and i was struck by a set of lyrics that speaks about the hip hop movement.  we like to discuss the salvation army as a movement, where we've come from and where we're going, and we like to criticize a lot that happens.  we worry about "the future of the army" and talk a lot of smack.  in the middle of all these discussions it can be easy to forget that if this movement has been called and established by God, then we only see a limited picture of how it is working to further God's kingdom here on earth.

here are the lyrics to the song "fear not of men" by mos def:

Well, from my understanding people get better
when they start to understand that they are valuable
And they not valuable because they got a whole lot of money
or cause somebody think they sexy
but they valuable cause they been created by God
And God makes you valuable

Bravenet Blog
Get One For Free!
powered by